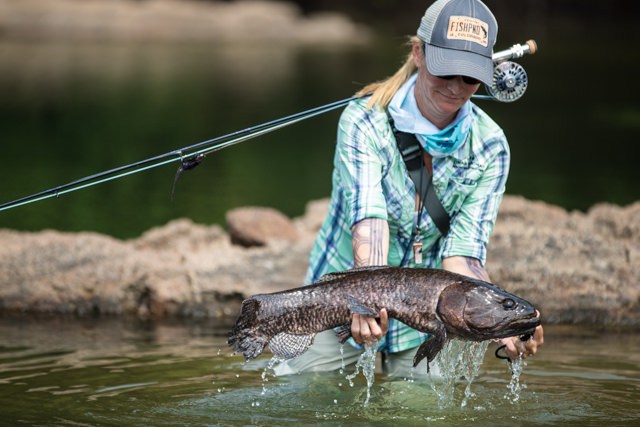 Meredith McCord and photographer, Matt Jones, of Tailwaters recently returned from jungle angling in Kendjam in the Amazon Basin of Brazil with Untamed Angling. We will be featuring Meredith’s daily record of her angling ventures in a nine-part travel journal. This is part six.

I woke up this morning to howler monkeys barking from deep in the jungle. Breakfast, as usual, was eggs made to order bacon, toast and fruit. Always interesting to see what food Untamed Angling comes up with. Last night we had clam, squid, and shrimp seafood spaghetti, and this morning we had strawberries, apples and kiwis.

Roberto, Rafael, and I headed upstream to try our hand at some big peacocks. The trip took a little over two hours, but the place is beautiful and very picturesque. It reminded me of a dry river bed that left behind crystal clear pools. 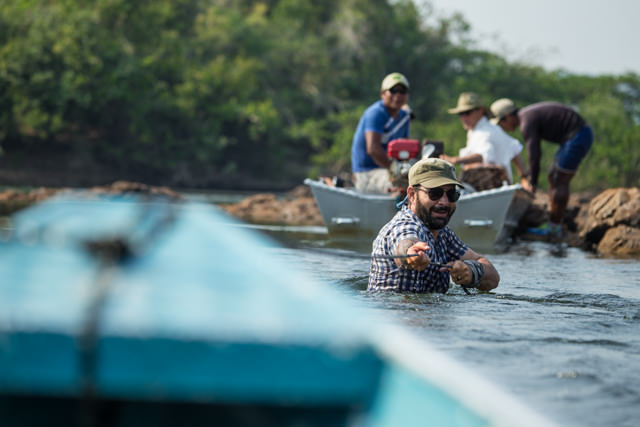 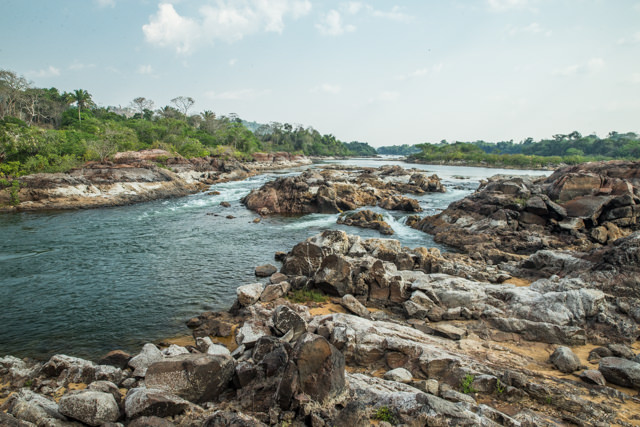 Roberto, Rafael, and I headed upstream to try our hand at some big peacocks. The trip took a little over two hours, but the place is beautiful and very picturesque. It reminded me of a dry river bed that left behind crystal clear pools.

We started with two float line rigs: one with a large popper, and the other black and purple streamer for my 8wt Sage ONE with RIO Redfish and an 8′ leader (30-20-4lb wire). This is the fishing I love. Pure sight casting. We slowly crept to the edge of the first deep pool, trying to peer from a distance into its depth. Sure enough, a large tucanare peacock was swimming lazily behind a large crescent moon shaped rock. So we got on our hands and knees and crawled close enough for the cast.

From this angle the fish can’t see us, and we can’t see the fish. I tried a few casts with my streamer and nothing. So we crawled a little closer … in the shadow of this moon rock, and we spotted several nice wolf fish laying on the bottom.

With the popper rod, Roberto and I threw longs casts. It’s exactly what was needed, but these lazy fish only nosed our poppers and weren’t aggressive enough to eat. So we switched to our streamers and literally dropped the fly on the trahira’s (wolf fish) head, and they lethargically opened their mouths and just casually sucked in our flies.

Honestly, I don’t think fly selection had anything to do with our success. I think I could take an old piece of a sock and drop it in front of them, and they’d eat. They’re just mean ugly predators looking to chew up anything in their path. 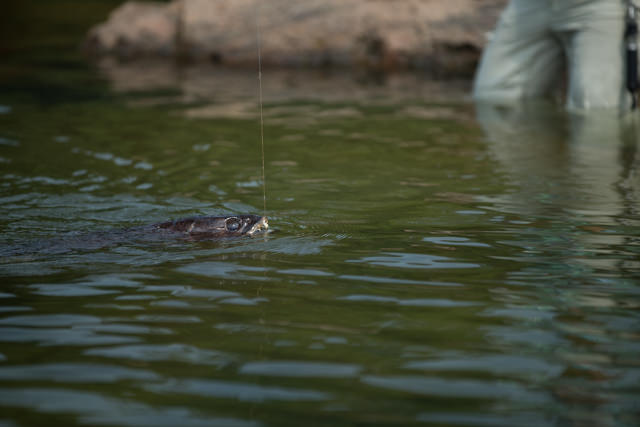 The fight was very disappointing, as this one didn’t even have the courtesy of jumping for us. It almost acted bored with the whole thing. After fooling with the trahira for a while, we redirected our efforts to pursue a few bigger tucanare. Within seconds an opportunity presented itself: a large male and a smaller female (often the case) appeared in the middle of our pool. I tried the steamer, and over and over again they only nosed it. So lazy. All happening 20-30′ from my rod tip. Eventually I went back to my black and purple streamer and finally I elicited an irritated bite. Unfortunately, it’s the small one, but at least my efforts paid off. 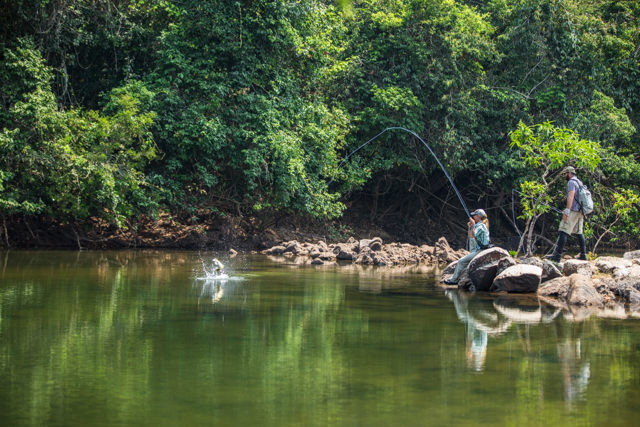 From there we wandered from pool to pool looking for more fish, but much to our disappointment the water was low, still, and warm … therefore vacant on life. Finally we make it to the top. The pool is much deeper, and I am sorry I only had my floating lines and not my intermediate line. So I changed my lighter streamer for a lead-eyed white and chartreuse (with some flash) Clouser and made a few casts. I see a small peacock on the edge and cast past it with short 3″ fast strips. But A piranha beats the peacock to the fly. I cast again, and a repeat of what just happened before happens again. Ugh. At least it’s the type of piranhas that the Kayapos love, so they are set for a BBQ fish lunch. Roberto hooked into two peacocks – one really nice one that came up and with a huge headshake sent the fly flying. One more small peacock for me, and we headed back down to the boats for a sandwiches, salad, and a super delicious dolce de leche and chocolate cake. Decadent.

After lunch we took the boats upstream in pursuit of pacu and maybe a peacock or two. Armed with my Thomas and Thomas 6wt solar, RIO Redfish 6wt and Abel Super 5n with a 10′ leader of (30-20lb), I started with a large black chubby Chernobyl but had no risers, and I couldn’t see any fish in the fast moving rapids. So I switched twice more with no takes.

Matt spied a few peacocks on the far bank and encouraged me to re-rig to a streamer. So I cut my leader back to about 8′ and added 12″ of 30lb wire and a large-eyed green-backed white baitfish pattern with a 4/0 hook. I casted my fly towards Matt across the fast moving water into the eddy, mended it up and immediately had a peacock swing and miss my fly. This happened three more times, always hitting on the mend like brown trout on a streamer, loving the change of direction and speed. Unfortunately all the fish were short striking my fly, so I used my nippers to roughly trim the back 1/2″ off my fly.

Sure enough, my next cast resulted in my line going tight and a landed 2lb lit up peacock. Twice more the fish tried to eat on my mend but missed, and now it was time to start the trip back to the lodge. 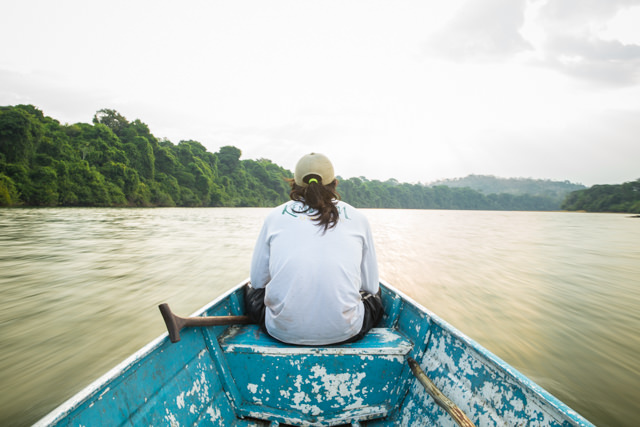 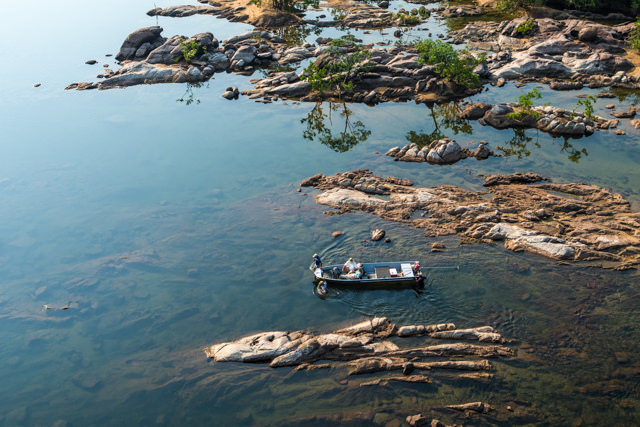 I was hopeful it would be quicker going down than the two hours that it had taken coming up. On our way down, Rafi decided we had about 20 minutes to try one more time for a fish at the rapids with the pacu. The only one with any luck was Matt when he slapped a small Clouser onto my Thomas and Thomas 5wt and jumped a peacock out of the bottom pool. Otherwise it was pretty slim pickings, but was one of the prettiest spots we had seen thus far: dramatic boulders and three small consecutive waterfalls with deep aqua pools. I might have to do a little cliff jumping here tomorrow on our way up camping … as long as the piranhas don’t get the wrong idea when I jump in.

The trip home was shorter, and we had some fun shooting the rapids. On our way back to camp we passed our friends and lodge mates Romi and Gilbert, who were being guided by lodge hostess and guide Manuela. All three looked to be having a successful session on the high rocks below a rapid. 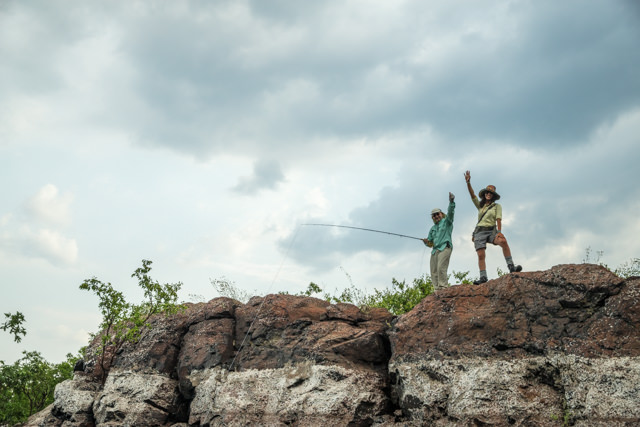 Dinner was pirarucu (arapaima), with herb and lemon risotto and a parmesan crisp. The fish was very tender, white and flaky. Not at all what I was expecting for such a huge gar/tarpon-like fish. All so yummy.